If chlorine is a very common element, then why does it need to be produced?

Chlorine is a naturally-occurring chemical element. Although it occurs naturally on earth, it exists chiefly in compounds, bound to other types of atoms such as sodium. Chlorine is highly reactive, so it bonds easily with other elements. More than 2,000 naturally-occurring chlorine-based compounds have been identified in all kinds of organisms and places, including the human body.

Table salt is a key ingredient

One of the most abundant natural sources of chlorine is sodium chloride (NaCl), also known as table salt. Sodium chloride is very prevalent in ocean water and is also found in concentrated mineral deposits remaining from ancient oceans that have dried up over long periods of time. How is chlorine made from this common compound?

When dissolved in water, sodium chloride creates a brine. Electricity is then applied to that brine to create chlorine gas (Cl2). Two other substances are created as a result: caustic soda (most commonly in the form of sodium hydroxide [NaOH]) and hydrogen (H2). 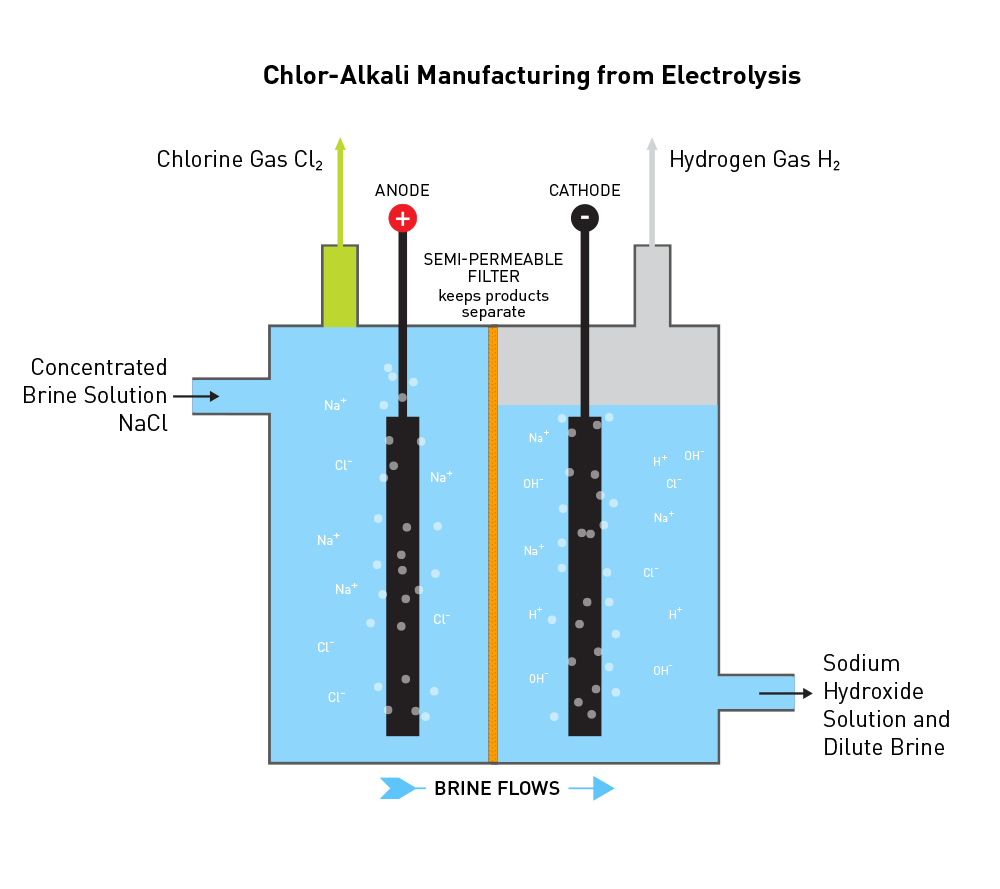 A simple look at how chlorine is produced

A deeper dive into chlorine production

How is chlorine made?

However, the brine must be purified to remove potential contaminants, such as magnesium, calcium, and iron that have the potential to disrupt the electrolysis process described below. To do so, brine is filtered by ion-exchange membranes that allow only the sodium and chloride ions, along with water, to pass through the membrane.

The chlorine manufacturing process, which includes industrial preparation and production of chlorine, sodium hydroxide, and hydrogen, involves a common chemical reaction known as electrolysis. This reaction occurs when electricity is applied to brine. The electricity rearranges the elements present in the brine, NaCl and H2O, and creates Cl2, NaOH, and H2. The chemical equation is:

Electricity is applied to the solution through two electrodes in the cell, the anode and cathode. The anode has a positive charge, the cathode has a negative charge, and electrons flow from the anode to the cathode. The electrodes are submerged in the liquid brine. Between the electrodes is a selectively-permeable membrane that allows positive ions to pass – hydrogen (H+) and sodium (Na+). The selectivity of the membrane keeps the final products physically separated.

The positive charge of the anode attracts the negatively charged chloride ions. Upon contact with the anode, the chloride ions lose two electrons (oxidization). Instantaneously, chlorine covalently bonds to itself to make Cl2 gas that is removed from the electrolytic cell. The chemical equation is:

The negative charge of the cathode attracts the positively charged sodium and hydrogen ions (often referred to as protons). Hydrogen ions and hydroxide ions are present due to the natural state of equilibrium of water. At the cathode, positive hydrogen ions gain electrons (reduction) and instantaneously covalently bond with itself to form H2 gas that is removed from the electrolytic cell. The chemical equation is:

Chlorine gas is contaminated with oxygen that must be removed. By cooling the gas, the chlorine turns into a liquid, while the oxygen remains a gas, thus enabling its separation. This process is called liquefaction.

How is chlorine made from other compounds? Sometimes, the salt used is not sodium chloride, but rather potassium chloride (KCl). When KCl is used, the resulting products are chlorine, potassium hydroxide (KOH), and hydrogen gas.